Last Friday, I went to an event organised by a company called MindBody Breakthough. The event was called ‘Treating Generalised Anxiety and Panic Attacks.’

Ironically, I was anxious about this event before I got there, not sure what to expect, or if I would understand anything that was going on. I had bought a book on anxiety earlier in the week, hoping that it would lay the foundations so I could at least ask some intelligent questions. Unfortunately, I had only managed to get to the end of the first chapter by the time the event rolled up. Oops!

This is the first step of my new project that I mentioned in my previous blog post. I really wanted to attend an event that would give me a working baseline of anxiety which I could build upon in my research. Especially since all the knowledge I had prior to the workshop was ‘anxiety bad.’

In the anxiety workshop

The man running the workshop was named Wale Oladipo. Wale has been studying anxiety all his life – it affected him quite badly when he was younger and living in Nigeria. When he began his presentation, I found myself drawn in by his combination of personal stories, metaphors about Downton Abbey, and infectious laughter. He set out to explain the science behind anxiety in as simple a way as possible. We covered which parts of the brain cause anxiety (The amygdala! The limbic system! Other brain words which make me sound smart!), outlined some strategies to help cope with different types of anxiety, and covered how to manage panic attacks, both prior to and during an episode.

The event ended, quite unexpectedly, with a meditation session. We closed our eyes and (in his surprisingly soothing voice) he helped us relax, and guided us through a technique to help establish a more positive mindset, and help us face up to the negative thoughts which lead us to anxiety. I battled my own personal demon – a constant feeling of being useless – and left the session feeling a lot more positive about myself. He has even sent all the attendees a recording of the meditation session, so we can continue to meditate at home.

Overall, he managed to provide an interesting, informative and enlightening session! He even managed to keep my attention for five hours while using PowerPoint – a feat I didn’t think was possible.

I now have pages of notes to pore through and, thanks to Wale and his workshop, feel that I have taking a significant first step on my journey. If you suffer from, or work with anxiety sufferers, I highly recommend attending his course.

BONUS: I SAW MY BRAIN!

At one point, he pulled out a small, black headset called an ‘Emotiv’. As I was the person with the shortest hair at the event (it hasn’t all disappeared yet!) I was chosen to model this fashionable headpiece – unaware of what it actually did.

Electrodes. That’s what’s inside it. When it was placed on my very shapely skull, Wale brought up his iPad screen and there, projected in front of us, was a 3D brain.

“What do you like to do to relax?” he asked me. I thought about it.

The brain on the screen FLARED TO LIFE – lightning sparkling all over it!

Ooooooooh! everyone said. It was my brain. I was seeing myself think. It was amazing – and a little strange. I now am incredibly aware that there is a thing inside my skull and it does things. If you attend one of his events, or you ever get the chance to try out one of these bad boys, you should definitely give it a go! 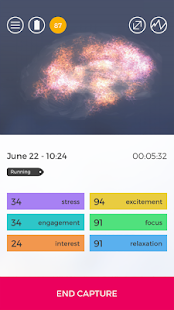 Anxiety! Brains! Downton Abbey? This workshop was quite the adventure. If you have any ideas of what I should do next for my project, let me know below!

Richard! It was such a great pleasure connecting and sharing together on the day. I am very glad that you found the workshop very useful. You added great value to the event. Thanks also for volunteering to get your brain scanned with the neuro-headset. It was fun! And you’ve got a great beain😀👍! Great article here, fantastic project and a lovely website. Keep the great job going! Best regards….Wale Oladipo

Find out about me:

Um... did any of you leave your elephant in the As

Lit up by the soft glow of unanswered emails. #se

I good at books.

There is no such thing as too many tomatoes! (He s

(When he isn’t complaining about being blocked)

Celebrating today 5 years of being with this crazy

It’s one of those days. #friday #swans

Time for Christmas #boardgames! Where is Mr. X? (

What is this guy planning? #snowman

Learning can be scary

I recently started a new job. In short, it has been terrifying. At the same time, it has been wonderful. Every day, I’ve learnt something new, and every day I feel I have made a massive Read more…

This year, at the NAWE conference, I attended an amazing workshop run by Carole Bromley all about writing children’s poetry. It was quite an intense hour and a half. She got us to write a Read more…